Bounce and Pounce in a Zany Evening, Channeling Singers

Sometimes it’s best to start with a song and add a few steps. David Zambrano has done that and more in “Soul Project,” an enthralling evening of visceral solos set to soul music.
The work, first performed on Thursday night at Danspace Project, served to introduce Platforms 2010, an artist-organized series conceived by the space’s executive director, Judy Hussie-Taylor, in an attempt to widen the scope of dance presentation. Mr. Zambrano is part of “i get lost,” organized by Ralph Lemon, which focuses on transformation, transcendence, transgression and trance.

“Soul Project” is a welcome return for Mr. Zambrano, a treasured improviser and teacher who lived in New York in the 1980s and early ’90s and is now based in Amsterdam. Infusing the evening with his usual joviality, Mr. Zambrano appeared in an African-print suit with tails and explained the evening’s structure as audience members gathered around. Viewers were encouraged to get close to the cast as it performed, he said, “solo after solo after solo.”

Edivaldo Ernesto in “Soul Project,” a production by David Zambrano for “i get lost,” organized by Ralph Lemon for Platforms 2010, a series at Danspace Project. Julieta Cervantes for The New York Times.

He was interrupted by a shriek; Edivaldo Ernesto, a slender, elastic dancer from
Mozambique, began moving in a solo almost violent in its ferocity. He slammed his feet on the floor, twisted his arms like unruly branches and interrupted the silence with the occasional anguished wail, “It’s my heart!” (This reference became clear later, when he danced a solo to Bola De Nieve’s “Be Careful, It’s My Heart.”) Just as quickly as it began, it was over.
“This is an example,” Mr. Zambrano said, with a twinkle in his eye, “of the solos.”
Nina Fajdiga, a soloist for “Soul Project,” set to music from Aretha Franklin, Stevie Nicks, Patti LaBelle, Baby Huey and Bola De Nieve, among others. Julieta Cervantes for The New York Times.

As dancers performed under spotlights, wearing flamboyant costumes by Mat Voorter in collaboration with Pepa Martinez, the intention was clear: to match the voice of the singer with a body language so deep and spontaneous that the performer seemed to be drawing energy from the floor. In his program notes Mr. Zambrano writes that the process is about “Being continuously alive. On, like a candle.”

Nina Fajdiga, in a polka-dot dress adorned with pompoms, dropped into a split (a nod to James Brown?) to Aretha Franklin’s “Misty.” Milan Herich, stripped to the waist, hopped from one foot to the other — grinning crazily as he reached a dangerous speed — accompanied by “At Last,” sung by Stevie Nicks.

In “I Don’t Like Goodbyes/Over the Rainbow” by Patti LaBelle, Peter Jasko, dressed
in a blue bodysuit with gold-sequined trim (and matching eyelashes), repeatedly collapsed and rose with the resiliency of a rubber ball. And the mesmerizing Horacio Macuacua, dancing to “A Change Is Gonna Come” by Baby Huey, moved with a grounded forcefulness as he fixed his gaze on an invisible point above the crowd.

Throughout, Mr. Zambrano was a calmer presence. With his uncanny sense of weight and instinctive pounce, he seemed to savor the music. The audience, following the dancers with unusual dexterity, remained still and receptive during the performances: the goal, on our end, was to do anything to prevent the flames from burning out.

Dans - David Zambrano’s “Twelve Flies Went Out At Noon In”

A Man Dances and Everything is There: Skill, Smarts, Spirit

If there were prizes for wiliness in dancing, David Zambrano would win them all. He looks deft enough to slip through cracks, dive into keyholes, invade your heart. He’s loose and resilient without any loss of precision. No wonder the Venezuelan-born dancer-choreographer is always traveling—to teach here, perform there. Anja Hitzenberger’s film, an integral part of Zambrano’s Barcelona in 48 Hours, leads him (and his dancing partner, Mat Voorter) through airports and into studios and homes—packing and unpacking, having a haircut, dancing in the street. 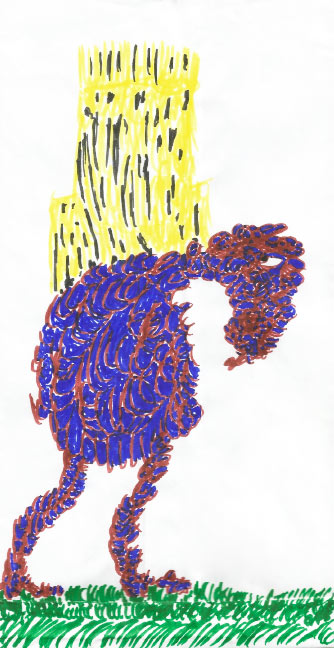 Movement Research at the Judson Church

NEW YORK — Movement Research at the Judson Church played host to a substantial spread of works on Monday. The series, which is free, draws a large, lively audience that comes ready for fun. It wasn’t disappointed.

Maybe it’s because I know about Jennifer Monson’s Bird Brain project that I view her “Improvisation” with David Zambrano as akin to animal behaviour. The two share a territory: the open space of the church. In it they run, collide, play, ignore, fly, groom and spat. Like monkeys whose attention shifts are lightning fast, they could be drawn anywhere at any time and seemingly natural events deflect their trajectories unpredictably. Headed that way? Oops — fly zings by, catch it!

Simone Forti, an elder in Monson’s lineage, spent lots of time watching animals at the Bronx Zoo and bringing their captured motion to life in performance. Monson expands the brief. She and Zambrano in their habitat revel in their dancer/animal range of possibilities. Watching’s like a pleasurable afternoon at the zoo. And not. Sure a hand becomes a claw and yes some animals move just for the sake of it, but these two propel themselves attracted by nothing so much as wanting to see how different parts of the body will kick in to a longer stream of moves. It’s a field of surprise, just as this moment’s a new one — this itch, this urge, this wish to contact is just for now.

Monson’s hands turn her, exploring the space within range, feet stepping on all surfaces — toe pads and squishy heels. She breaks at an elbow, does an easy crashing slide into floor, grounded. She’s become so fine tuned, she plays anywhere on the range of tension. Nothing is here because it’s flashy. Her movement sentences just tumble out. Zambrano fires off rapid streams of easily springy movement, often starting from a feet grounded incline. We hear him think too — snippets of talk and offhand comment; “They have to fix the floor,” he says, sliding a playing card, and as it gets caught on the floor’s unevenness adds “See?”

Zambrano and Monson have the easy familiarity of friends whose bodies are comfortable together but not sexually charged. Flying fingers say “Here I am!” A look says “Coming at you!” They make satisfying space pictures, arm calligraphy and tappy rhythms. The music is by Doug Henderson using all manner of soundmakers — tossing coins, rubbing cards, swishing hands in water — and Guy Yarden, who provides electronic hum, vibrations, and throbs. We have a windy tunnel, a whale, a secret corridor, all evocations of another kind of real world, perfect to play in.

Speaking of play, it seemed hard for the four to find a clear end, just as kids having to drag themselves in on a summer night straggle back. We forgive them — it’s so much fun out there.

Lisa Kraus will perform at Movement Research at the Judson Church on March 29. Her ongoing web log is Writing My Dancing Life.

Zambrano spins his dance from the premise that partnering– ballroom, salsa, samba, or contact–is an interaction or energy exchange rather than a set of formalities. Cheek-to-cheek takes on new meaning as two dancers waltz bum-to-bum. In BALLROOM, Zambrano explores and explodes the idea of social-dance partnering with same gender partners, five-person “partners” and even a column and a rectangle of light as dance partners. In fact, throughout the piece Carol Mullins’ lighting design is a stunning precense.

Zambrano’s music choices range from Ellington, Basie and Thelonius Monk to Tito Puente and X-Legged Sally. The costumes designed by Voorter are witty and colorful: blue jeans enlivened by a frilly skirt, fur-trimmed bell-bottoms and a T-shirt with red buttons sewn on for nipples and a belly-button.

In Zambrano and Voorter’s duet, they dip and drop to their knees but don’t make eye contact. This mating dance is characterized by curvy human maneuvering and unexpected rhythms. Zambrano challenges our reliance on the down beat. The two fly across the space. They meet eyes. Their tender duet evolves into weightsharing and contact improvisation. Together, they redefine ballroom partnering for the male couple.

In the romantic duet that follows, the dancers create a springy, calm world inside a rectangle of light. Another dancer walks in and faces his partner, the white column. He pants. His focus on this shaft-like column conveys to us the gender of his mate. Later, Zambrano appears to pun on square dancing when partners loop and swirl inside a square of red light. A risky, sinewy five-person flying pretzel dance occurs, and then, four men dive, spin and leap through center stage in a series of exuberant diagonal crossings. After Zambrano blows softly on the face and eye sockets of Voorter, the piece cools to a sensual silence between Zambrano and Angarita.

Zambrano intermingles set and improvised movement so skillfully it is difficult to detect when the performers slip from one to the other. The group dances with vitality and immediacy. Zambrano uses his speedball body and gleeful outcries–like excess body energy coming out verbally–to express elfin delight. By the end of the evening, the dancing has become a music of its own. 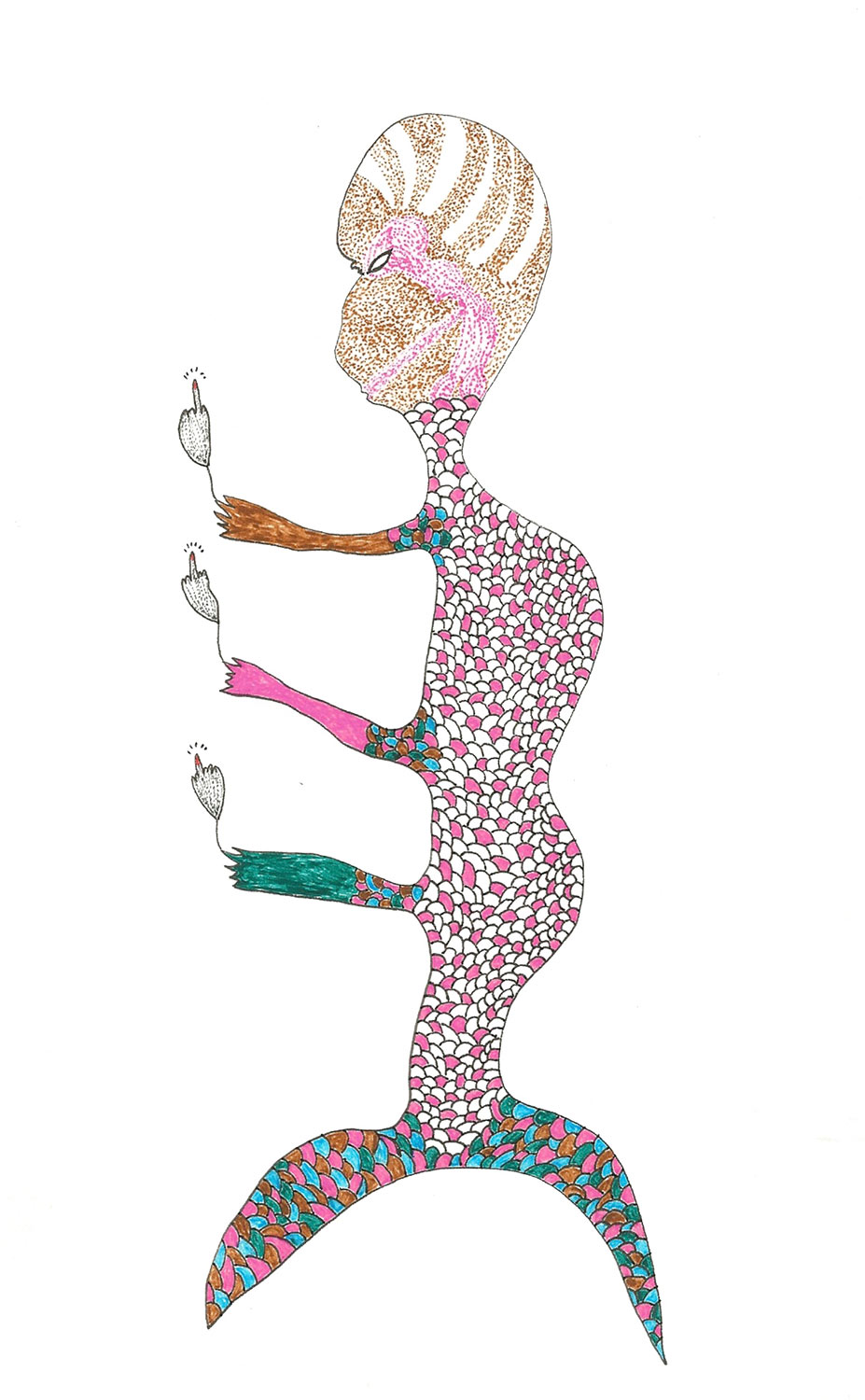